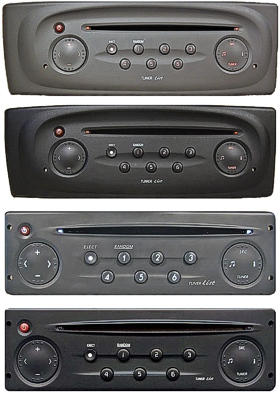 > Removing your radio and checking the details
> Entering the code we send
> What if it's locked me out?

There are several variants of the Philips 22DC279 with the suffix /62E, /62F, /62P and so on, often fitted to many older Renault models including the Laguna, Clio, Scenic, Kangoo and Trafic. Although written for the Philips 22DC279 series, much of what follows will apply to several other Philips radios in Renault cars. You will need to find the serial number or six digit 'pre-code' from the chassis of the radio, so the first thing is to pull the radio from the dashboard enough to be able to read the label. You will need a pair of car radio removal keys. These 'prong keys' are inserted into the holes on either side of the radio fascia. When inserted as far as they seem to go, you should feel a slight 'click' as they engage with the clips inside. It may help to apply slight outward pressure on the keys (this has the effect of pushing the inner locking clips in towards the radio) then draw the radio out. If the clips inside have released, it should slide free without much effort.

This model comes in different faceplate forms but all have the display remote from the main player. After we have sent you your unlock code, switch the radio on - the separate display should show 4 digits with the first one flashing. If the display shows only a constant 'CODE', you will need to wait for the radio to reset and allow another code-entry attempt (read more on this below).

You will need to use the stereo system's steering wheel controls to enter the code we've supplied. Locate this or a similarly marked button on the steering wheel stalk control (see the photo - the stalks vary from car to car but Renault use the same button icon). We'll call this the ENTRY key. Use the thumbwheel selector on the stalk to select the first number of the code - the selected number shows on the display. Press the ENTRY key to accept it.
The next number will now be flashing. Repeat the process for each of the next three numbers (selecting the number using the thumbwheel and pressing the ENTRY key to accept it).
After you have entered the last number of the code, check the full code is now shown correctly on the dashboard display and, if correct, accept it by pressing and holding the ENTRY key for a few seconds until you hear a beep and the radio bursts into life.
If you made a mistake, press the ENTRY key again briefly and it will return to the first number, then repeat the whole process again.


Many models of radio have an automatic 'temporary lock' feature that will lock out any further code entry attempts if too many are attempted. The screen will often display 'WAIT' or 'CODE'. For this reason, do not try to guess the code, and enter the code we send you carefully. Most radios will exit the temporary lock state after an hour or so of leaving the radio powered on, sometimes up to 2 hours. In some cases, further unsuccessful attempts will cause the radio to permanently lock, and in those cases only a physical reset of the code (on a service workbench) will get it going again, so avoid guessing at too many codes.