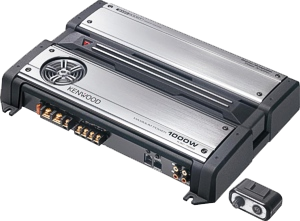 A car audio amplifier - or "power amplifier" to give it its full name - takes the very low level audio signals from your Cassette, CD or MP3 player and brings them up to a level you can comfortably hear. Every car audio system has at least one amplifier, though you may not be aware of it.

Manufacturers of in-car Cassette and CD players usually build a power amplifier in to the same chassis as the CD playing mechanism. It makes it very convenient to have it all in one box but the standard dimensions of a car CD player becomes a limiting factor.

The built-in amplifiers are often surprisingly good these days, but if you want a big sound free of any distortion - and especially a deep, true-to-life bass sound - you need to look at having a separate external amplifier fitted.

Free of the constraints that the relatively small CD Player chassis imposes, designers can build an amplifier that provides the desired power output and sound quality, as well as sometimes building in some extra features, such as an equaliser or an "active crossover" (see the section on Speakers for an explanation on crossovers).

Most, but not all, CD players and other "head-units" have what are known as pre-amplifier level outputs. These are usually provided via the now standard phono type terminals and allow the best signal quality connection from your car CD player to the external amplifier.

If your in-car CD player does not have pre-amplifier (or 'pre-amp') level outputs, you will need to either buy an amplifier that offers "speaker level" inputs or buy a separate 'speaker level to low level' interface cable. If upgrading a factory-fitted CD player, you may need a specific interface cable. Your specialist MMSA car audio dealer will of course be able to help you. This stuff can all sound very complicated but for them it's no trouble.

When shopping for a power amplifier, it is easy to be misled by some manufacturers' claims. While there are standards for measuring things like power output in Watts, it is not difficult for manufacturers to quote wildly optimistic power figures without actually lying - they simply don't tell you the exact conditions of the measurement. And we reckon that a few do just make it up!

Also, you cannot rely on the physical size of the amplifier to be an indication of its power output capability. Some have more space than components inside the case!

Some are far more efficient than others - that means they are better at turning the 12V coming in at one end into audible power at the other, so they don't need such a large metal finned plate (called the heat-sink) to get rid of the power that the other models waste warming up the air.

The car audio amplifier's efficiency will also dictate the size (the correct term here is "gauge") and therefore cost of the power cables your fitter will need to use, and the drain on your vehicle's battery.

Wiring a power amplifier is not something to be taken lightly. You should never simply wire it into the car's existing power cabling. For one thing it will almost certainly cause the electrical current down the wire to exceed the cable's safe operating specification. You also stand a very good chance of picking up interference through the shared power cable or grounding point.

Trust your specialist installer to tell you what you can expect to get from a particular product, whatever it says on the box, and if you decide to fit the amplifier yourself, they will be able to advise you on the correct cable gauge to use and other precautions. This advice can be priceless but is usually given for free!